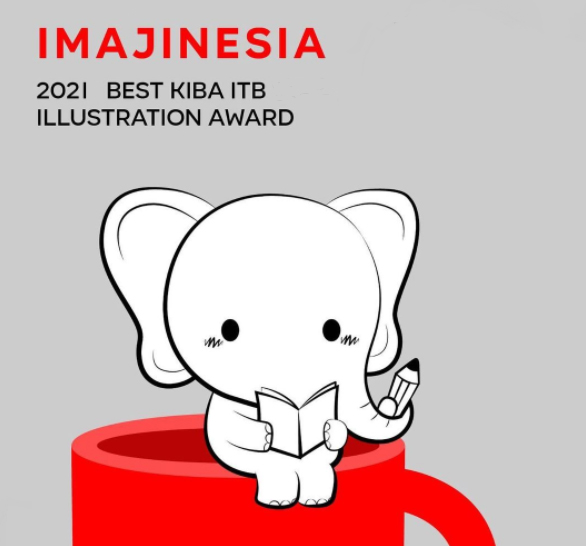 The Imaginesia Award is a annual award given to students who enrolled in Illustration and children’s book design classes. These students have high dedication to class projects, stand out ability to develop a concept, and clear visual expression. -Triyadi Guntur 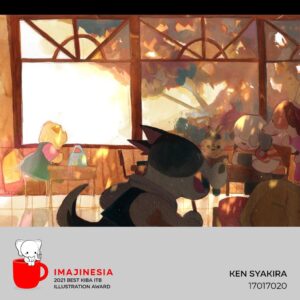 Tells about a sharpie dog named Lala who is not confident about her appearance. He felt very lacking and wanted to shine like his friends in class. This story follows the story of Lala Dalam looking for a way to shine in her own way.

His hobbies are journaling and eating.
Ken’s hope is that children’s book illustrations can be exploratory in the themes they bring, as well as getting to know a child from a psychological aspect. 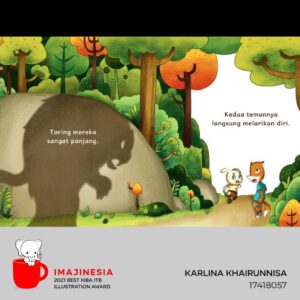 “Lulu, Lala and the Tree House” by Karlina Khairunnisa #KIBA2021

Ken has a new hobby because of the pandemic, which is cooking, cleaning, and playing with cats.

His dream is to become a writer and illustrator with a style that is friendly to children. The hope is that children’s books can be imagination for all children from various backgrounds. 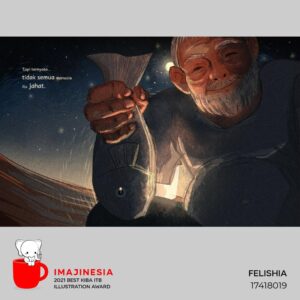 “Stories from Under the Sea” by Felishia #KIBA2021

“Humans are Evil!”
That’s what the sea creatures say. But Beena doesn’t believe that humans are evil, so all the big monsters come and kidnap Beena’s friends! Since then Beena doesn’t want to trust humans anymore!
But, Beena is hungry… hmm, what is fish? “Man?!?!” Even caught humans!! He had to RUN.

In order to learn a lot, Felish hopes that there will be more children’s books for Indonesian children so that children will enjoy reading more. 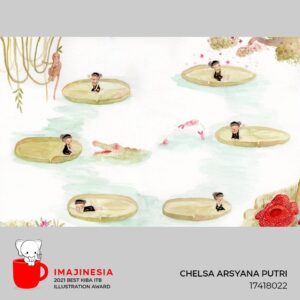 Borneo, a girl from the Dayak tribe feels bored while attending a traditional ceremony. He also went to explore the wonders of the jungles of Borneo, where he befriended a mythological creature named Lembuswana.

For the future of children’s literacy, Chelsa hopes to involve more cultural aspects and diversity in society and culture. Hopefully, children’s literacy can help develop children’s emotional intelligence and creativity, as well as foster the process of growth and development of readers. 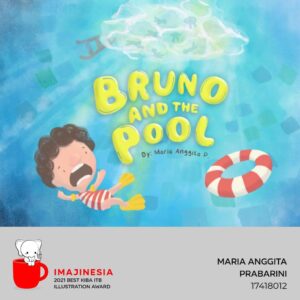 Bruno, the curly-haired little boy was most afraid of swimming. However, on that day there would be a swimming class that Bruno had to take. It was clear in Bruno’s head, the monsters at the bottom of the pool waiting for him to swim, pulling his feet to the bottom and preventing him from returning to the surface. Just dipping his toes, Bruno screamed and immediately hugged Mr. And. Seeing Bruno’s fear, Mr. Dan asked his friends to swim first to show Bruno that swimming in the pool wasn’t scary. Finally, little by little Bruno wanted to enter the pool.

Her hobby is playing the piano, Maria hopes that more children’s books by Indonesian writers and illustrators can be presented and traded in the largest bookstores in Indonesia so that they are easily accessible to our nation’s children. It would be even better if it could be spread throughout the world. In this way, Indonesian values ​​and culture can be lived and preserved. 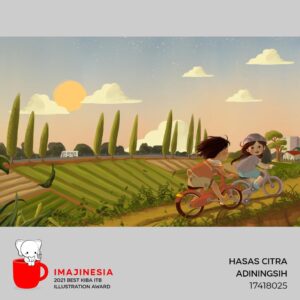 One day, Runi has a new neighbor in her complex. Her name is Lily. Together with her friends, Runi invites Lili to ride a bicycle. But Lili was so slow that she fell far behind. Seeing that, Runi was confused because her friends didn’t want to wait for Lili. What should Runi do?

Like the characters in the story, Hasas also likes to ride a bicycle. In addition, his hobbies are reading books and playing the piano.

For Hasas illustration is the door of all meanings before words. I remember the first time I was interested in reading books because I saw the illustrations in children’s story books. Therefore, I hope that the quality of children’s books in Indonesia will be even better so that children’s interest in reading can increase.